The Oyo Empire and Bashorun Gaa 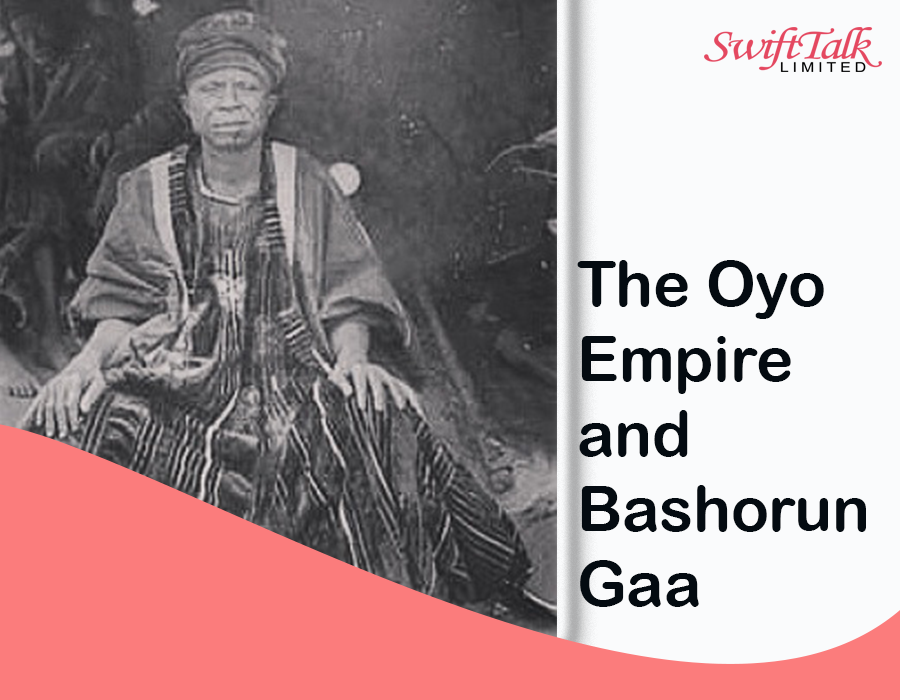 First Alaafin or King of the powerful Yorùbá kingdom of Oyo was Ọranyan. He founded Oyo made him the first Alaafin at around the year 1300.

Oyo-Ile as it was called then (not the modern day Oyo) has a lot of stories surrounding it, being the choosen place for many of the Yoruba gods and warriors, likewise kings and people of great reputation.

The oyo empire was a monarchical one and ruled by an Alaafin (king), (Alaafin means ‘owner of the palace’ in the Yoruba language). However, an administrative council and governing body, made up of chiefs (Oyo Mesi) served to maintain a balance in power. They were headed by a prime Minister called Bashorun and could request the king’s suicide by sending him a calabash of parrot’s eggs.

The Oyo Mesi were the seven principal councilors of the state. They constituted the Electoral Council and possessed legislative powers, similar to today’s National Assembly, Parliament and Congress.

Led by the Bashorun, acting as prime minister, who was assisted by the Agbaakin, Samu, Alapini, Laguna, Akiniku and Ashipa. They embodied the nation’s voice and had the chief duty to protect the empire’s interests.

The Alaafin was expected to take the counsel with them if there was any important matter that affected the state. Every man had a state responsibility to perform in court every morning and afternoon. Each member also had a deputy whom they would send to the Alaafin if his absence was unavoidable.

The Oyo mesi acted as a check and balance on the Alaafin’s power, preventing the king from being an autocrat; the council forced many Alaafin to commit suicide during the 17th and 18th centuries. The head of the Oyo Mesi known as the Bashorun who would consult the Ifa oracle for approval from the gods. The new Alaafin of Oyo was seen as appointed by the gods. They were regarded as Ekeji Orisa (companion of the gods.)

The Bashorun Gaa Rise and Fall

This brings us to the story surrounding Bashorun Gaa and his reign as the Prime Minister of the Old Oyo Empire.

Bashorun Gaa was an integral part of the Old Oyo Empire’s royal politics. No story of Oyo-Ile would be complete without a mention of his name.

Bashorun Gaa was instrumental to the military conquests during his time as a Prime Minister of the Old Oyo Empire during the 17th/18th century.

During the 17th century Oyo Kingdom, the monarchical failings came with a succession of uncharitable kings to the exalted throne. From Odarawu (who was bad tempered) to Kanran (an unmitigated tyrant) then Jayin (the effeminate and dissolute) down to Ayibi (the cruel and arbitrary) and Osinyago (the worthless) the Alaafin’s in the second half of the 17th century were despotic.

Odarawu was the Alaafin of Oyo after Alaafin Ajagbo, and his reign was short because he was considered a man of bad temperament. According to Oyo legend his bad temper led him to being removed as king and also served as educational warning and lesson to future kings on character development.

He was asked to commit suicide after his last blunder on the throne — he ordered the destruction of a town called Ojo-segi for the trite reason of being disrespected in the market by a trader in Ojo-segi.

He was followed by others who were as terrible as he was.

Bashorun Gaa being the head of the Oyo Mesi (the Oyo council of Kingmakers) became too powerful during that period supervising and executing the death of four Alaafins in quick succession. He was said to be so powerful he could turn to any animal at will.

He was Bashorun from 1750–1774 and was believed to have grown up during the reign of the 9 Alaafins. They were terrible kings and this could have affected his view of the office.

The unwritten Constitution which gave Bashorun (prime minster) a final say on the nomination of the new Alaafin and the control of the kingmakers was so great that the Bashorun ’s power rivaled that of the Alaafin himself. This of course was an open opportunity forBashorun Gaa to have absolute control of the political machinery of old Oyo kingdom of his time in his palms.

Power drunk, Bashorun Gaa became a classical tyrant during the Yoruba pre-colonial era breaking the support he had among the people against tyrant kings. The one who fights the tyrants became a feared tyrant himself.

Bashorun Gaa, unconstitutionally hijacked all the political power and machinery of Oyo kingdom. All the homage, respects and the material benefits meant for the kings were diverted to his personality. This was a great crime against the royal political system and great assault to the gods of the land and the past ancestors.

He was also said to have been a crime instigator. He was fond of aiding, abetting and covering the crimes committed by the people of his household. The history recorded the serial killings committed by his sons and head slave. The criminals were protected by him and even punished those who reported the crime.

The Bashorun ordered the massacre of the family members of one of his wives who was alleged to have attempted to poison him. He was however poisoned by the last Alaafin he killed, Alaafin Majeogbe. The poison left him weak, paralyzed and vulnerable.

Bashorun Gaa’s end was believed to have came during the reign of Alaafin Abiodun who ruled from 1774–1789.

As much as I want to believe Alaafin Abiodun’s plot against Bashorun Gaa was so he could have a peaceful and tyrant free reign, I think a more solid reason is because Gaa murdered his only daughter, Agbonyin.

While a version of the story states that Bashorun Gaa killed the girl for a ritual, another version states that Gaa needed a deer and when he couldn’t get any, he ordered his men to kill Alaafin Abiodun’s daughter, Agbonyin (who was forcefully married to him) because she had a similar name.

The furious and heartbroken Alaafin Abiodun met clandestinely with the Onikoyi and the then Are-Ona-Kakanfo, Oyabi from Ajaseland, on how to send Gaa to his grave and Alaafin Abiodun and his co-plotters succeeded in extinguishing the fear Bashorun Gaa had instilled in the people of Oyo-Ile.

In 1774, hundreds of angry people of Oyo-Ile were said to have stormed Gaa’s compound and killed all members of his household. Only his eldest son, Ojo Agubambaru had survived the attack and fled to a faraway land called Bariba in this version of the story.

Another version stated that his children fled Oyo for places like Egbado (Yewa), Badagry, Cotonou in Dahomey, all main locations where their father had contacts and that Ojo Agubambaru later came back to Oyo Ile to take the throne but was betrayed.

Bashorun Gaa himself was dragged out and tied tied to a stake at Akesan market and Alaafin Abiodun ordered that every citizen cut a pound of flesh from his body and drop it in a huge fire in front of him.

He was made to smell the odour of his own flesh, his nose was not allowed to be cut and flesh from the left part of his chest was excluded too (to prevent him from dying quickly).

The remains of his body were later burnt in fire to prevent his re-incarnation.

The public execution of this man eventually brought up a popular saying in Yoruba land to warn those in power and the rulers who are tyrants. The saying goes thus: “Bi o laya ko seka, sugbon bi o ba ranti iku Gaa ki o so oto”. This is translated as — “If you are brave, venture into wickedness, but if you remembered Gaa’s death, adhere to the truth”.

It must be noted that the death of the all-powerful Bashorun Gaa affected the Old Oyo Empire in some ways.

Firstly, it decreased the military and political strength of the Empire; this was due to the destabilization of the Oyomesi after Gaa’s death; the Oyomesi were supposed to act as a check to the Alaafin but instead became his puppet, and left him with absolute authority to rule the Empire.

Secondly, the political unrest the old Oyo Empire witnessed after Gaa’s death made some kingdoms under her auspices (like Dahomey) declare their independence.

Bashorun Gaa’s end was believed to have came during the reign of Alaafin Abiodun who ruled from 1774–1789).

Read On: The Bravery of Orompoto – The first Female Alaafin of Oyo and the Nupe.
Click Here to Direct to our website for more interesting Stories

5 performance metrics that are actually important to track
February 16, 2022