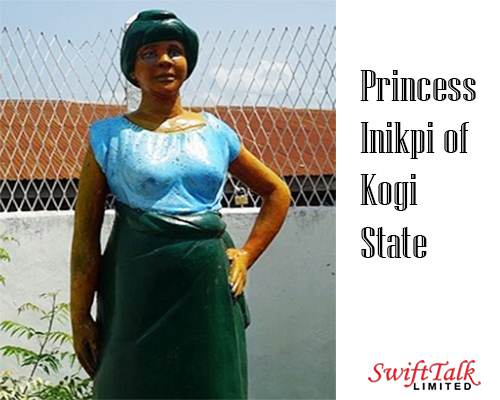 Yes, we know u’ve missed all our juicy highlights talking about the beautiful regions in Nigeria. Ensure you read to the end because you don’t want to miss this…….

Of courses, we practically have heard of the state Kogi but did you know Late Princess Inkikpi sacrificed to the Igala Kingdom and today the people of Kogi state hold her action dearly to their heart whose selfless commitment helped rescue and keep the survival of the Igala nation. A statue of her stands in a market square in Idah.

The story of Late Princess Inikpi is one of bravery and heroism. She was the only beloved daughter of Ayegbu Oma Idoko, former Atta of Igala Kingdom. The people call her Inikpi Oma’fedo baba which means “Inikpi, the father’s beloved”

According to historical records, It all started with a war between Benin & the Igala people which caused the land to be unsafe, farmlands were taken over by the enemies and stream been poisoned so that anyone that drank from them would die. Nowhere was safe at all.

The Igalas feared imminent death from starvation and lack of water. When the Atta (King) consulted the oracle, it proclaimed that a reversal of their misfortune and victory in the war could only come when the princess, the only daughter of the king is buried alive. —kogi state – princess Inikpi

Surely, the king was distraught heartbroken and shaded tears. For days, he didn’t eat or drink and he wished for an alternative solution. Of cos, no father would just agree for any of his children to be buried alive not to talk about the only child of the Atta (King).

The princess noticed the worries of her father and asked to know the reason for his sadness. Instead of opening up, he held off telling her the reason for seven days, but on the eighth, he relented and told her the words of the Oracle.

The Princess loved his father and her people as much as they loved her, could not bear the thought of holding off on the solution that would save Igala land. Princess Inikpi did not object, she did not fight. Therefore, she agreed to be sacrificed and set off voluntarily to the bank of River Niger at Idah (some say market square), where she was buried along with 9 slaves who would help her in the journey to the afterlife.

It was a sad resolution but the Igala people hailed her for her heroism. after the sacrifice, the story went on that as the Bini armies advanced to swoop, they saw the whole town in FLAMES and retreated feeling that there was no need taking the war to a place already on fire; but it was the blood of Inikpi that deceived them. However, it was the influence of the sacrifice.

Observance of the role the Princess played in averting disaster in Igala land still represents an important historical event in the life of the igala people. Today, so many people in Idah bear the name Inikpi in honour of the princess.

The sacrifice was a costly one, very expensive indeed, it, however, made peace reign again in Igala land.

Till today, the late Princess Inikpi who was sacrificed so that the Igalas might live remains the unifying factor in Igala land.

For this, the Igala people are forever deeply grateful to Princess Inikpi for her sacrifice and act of heroism. A statue of the princess stands at “Ega” in Idah, which is considered the Igala traditional headquarters. Several plays have also been produced to celebrate her story.