The Bravery of Orompoto – The first Female Alaafin of Oyo and the Nupe. 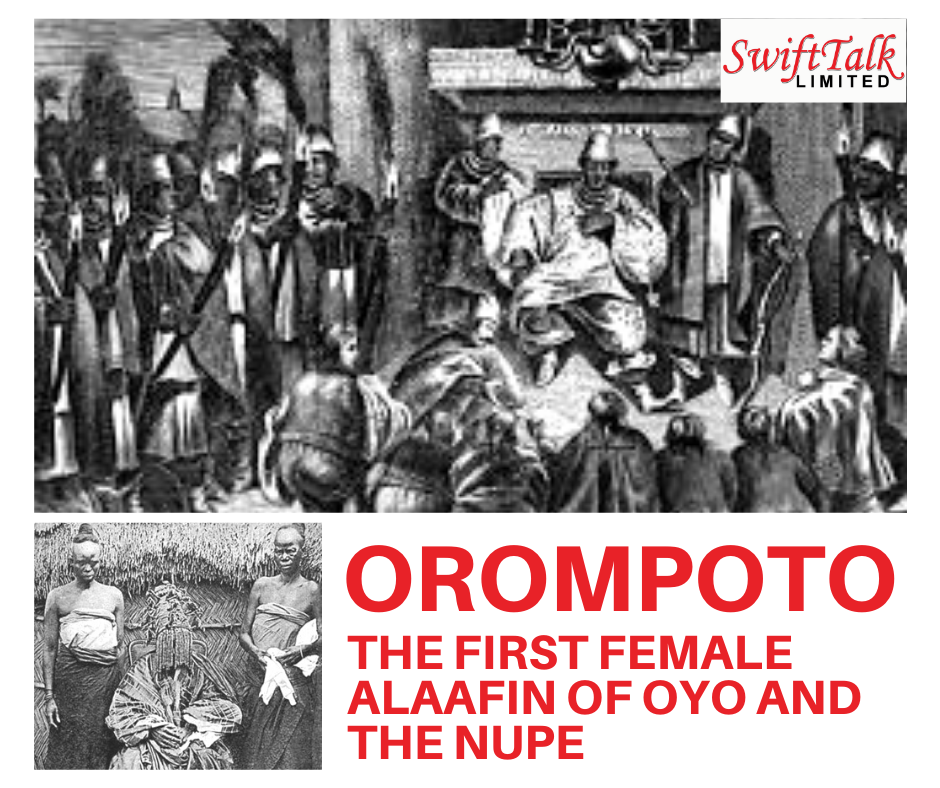 Oyo had grown into a formidable inland power by the end of the 14th century. For over a century, the Yoruba state had expanded at the expense of its neighbors. During the reign of Onigbogi (a king), Oyo suffered military defeats at the hands of the Nupe “(The Nupe – a town (traditionally called the Nupawa by the Hausas and Tapa by the neighbouring Yoruba)” are an ethnic group native to the Middle Belt of Nigeria) led by Tsoede “(The Nupe trace their origin to Tsoede who fled the court of Idah and established a loose confederation of towns along the Niger in the 15th century)”.

Sometime around 1535, the Nupe occupied Oyo and forced its ruling dynasty to take refuge in the kingdom of Borgu (Borgu is a region in north-west Nigeria and in the northern Republic of Benin). The Nupe sacked the capital, destroying Oyo as a regional power until the early 17th century.

After the death of Onigbogi, the eldest child (son), Prince Eguguoju became the next in line to the throne and he succeeded his father. However, he died in his young age without a male successor. His younger brothers, Prince Ajiboyede and Prince Tella were very young and as such couldn’t assume the throne at the time. As a result, Princess Orompoto (Onigbogbo daughter Sister to Prince Eguguoju) would leave her role as a regent (one that was instrumental in driving the Nupe from Oyo in 1555 after a protracted battle) to assume the throne.

Yoruba land has been described as a place where it is forbidden for a woman to lead the affairs of the society and most especially in royalty.

This decision didn’t sit well with the council of chiefs as there had been no female rulers in the history of the kingdom.
The chiefs and elders had started making plans on who to install as the next ruler of the Oyo Empire. For every plan they made, Orompoto was even more strong-willed and insistent that she was the only link to the dynasty and had to sit on the throne. In a bid to defend her family rights, Princess Orompoto summoned the chiefs to discuss plans for her coronation and this met the same negligent response. She then asked to prove to the elders and chiefs that she was a man, seeing as that was the only hindrance to her coronation. The chiefs thought it would be a good way to ridicule her and asked her to prove her masculinity in seven days and strip naked at the palace.

Princess Orompoto started wearing male items of clothing after this meeting and on the seventh day, she mounted the podium and removed her cap to reveal her hair which had been cut low. She also went ahead to show her chest (Legend has it that she cut off her breasts) and still, the elders were not impressed. She finally removed her trousers and according to oral history, the chiefs not only saw a penis, but they also saw a scrotum sack drooping with two scrotum eggs in the sack. At that point, everyone dropped on their chest in prostration and she got enthroned as Alaafin Orompotoniyun. 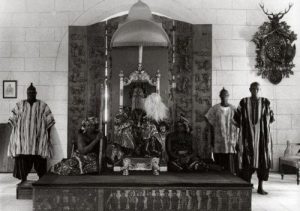 Orompotoniyun came to be popularly known as Ajiun, the custodian of the vagina that kills evil plots.

Orompoto used horses extensively in military battles and may have obtained them from Borgu. She was reportedly masterfully skilled on horseback, and created a specialized order of cavalry officers within her army that were subject to the Eso Ikoyi. 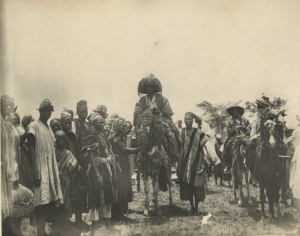 The first of its kind, the cavalry was a force to be reckoned with in the various wars with Oyo’s enemies. Considered a skillful warrior herself, she is said to have distinguished herself at the Battle of Illayi. While fighting her enemies there, she lost three war chiefs in quick succession, titleholders that are known as Gbonkas in Oyo.

The third of them is believed to have fallen with his face locked in an unnerving grin. The enemies thought that he was still alive and was making a mocking gesture, and were overwhelmed by what they considered to be their inability to best the Oyo gbonkas. They abandoned the battlefield thereafter, and the Oyo later claimed victory.

Myths and Legends of Heroic Women, From days of old, they have intrigued people all over the world: brave, defiant warrior women who stir imaginations, rouse passions, and often inspire thousands of followers.