The Concept of IoT (Internet of Things) 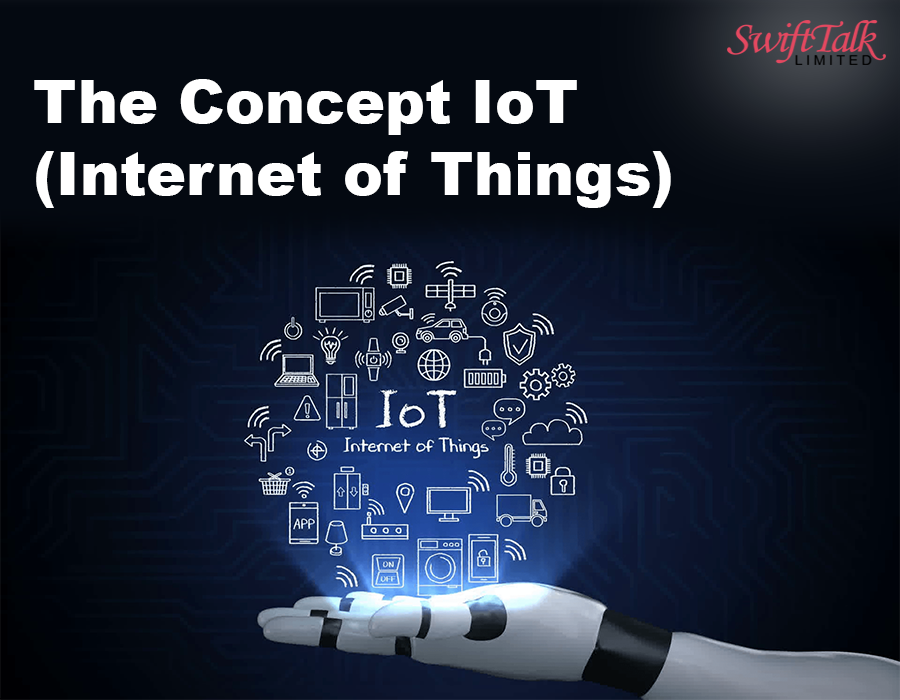 The concept of the “Internet of Things” and the term itself, first appeared in a speech by Peter T. Lewis, to the Congressional Black Caucus Foundation 15th Annual Legislative Weekend in Washington, D.C, published in September 1985. According to Lewis, “The Internet of Things, or IoT, is the integration of people, processes and technology with connectable devices and sensors to enable remote monitoring, status, manipulation and evaluation of trends of such devices.

The term “Internet of Things” was coined independently by Kevin Ashton of Procter & Gamble, later MIT’s Auto-ID Center, in 1999, though he prefers the phrase “Internet for things”. At that point, he viewed radio-frequency identification (RFID) as essential to the Internet of Things, which would allow computers to manage all individual things. The main theme of the Internet of Things is to embed short-range mobile transceivers in various gadgets and daily necessities to enable new forms of communication between people and things, and between things themselves.

Defining the Internet of Things as “simply the point in time when more ‘things or objects’ were connected to the Internet than people”, Cisco Systems estimated that the IoT was “born” between 2008 and 2009, with the things/people ratio growing from 0.08 in 2003 to 1.84 in 2010.

What is Internet of Things (IoT)

The Internet of Things (IoT) describes physical objects (or groups of such objects), that are embedded with sensors, processing ability, software, and other technologies, and that connect and exchange data with other devices and systems over the Internet or other communications networks.

The main concept of a network of smart devices was discussed as early as 1982, with a modified Coca-Cola vending machine at Carnegie Mellon University becoming the first ARPANET-connected appliance,  able to report its inventory and whether newly loaded drinks were cold or not Mark Weiser’s 1991 paper on ubiquitous computing, “The Computer of the 21st Century”, as well as academic venues such as UbiComp and PerCom produced the contemporary vision of the IOT. In 1994, Reza Raji described the concept in IEEE Spectrum as “[moving] small packets of data to a large set of nodes, so as to integrate and automate everything from home appliances to entire factories”. Between 1993 and 1997, several companies proposed solutions like Microsoft’s at Work or Novell’s NEST. The field gained momentum when Bill Joy envisioned device-to-device communication as a part of his “Six Webs” framework, presented at the World Economic Forum at Davos in 1999.

Over the past few years, IoT has become one of the most important technologies of the 21st century. Now that we can connect everyday objects, kitchen appliances, cars, thermostats, baby monitor to the internet via embedded devices, seamless communication is possible between people, processes, and things.

What technologies have made IoT possible?

While the idea of IoT has been in existence for a long time, a collection of recent advances in a number of different technologies has made it practical.

What are IoT applications?

The extensive set of applications for IoT devices is often divided into consumer, commercial, industrial, and infrastructure spaces.

A growing portion of IoT devices are created for consumer use, including connected vehicles, home automation, wearable technology, connected health, and appliances with remote monitoring capabilities.

IoT devices are a part of the larger concept of home automation, which can include lighting, heating and air conditioning, media and security systems and camera systems. Long-term benefits could include energy savings by automatically ensuring lights and electronics are turned off or by making the residents in the home aware of usage.

A smart home or automated home could be based on a platform or hubs that control smart devices and appliances. For instance, using Apple’s Home Kit, manufacturers can have their home products and accessories controlled by an application in iOS devices such as the iPhone and the Apple Watch. This could be a dedicated app or iOS native applications such as Siri.] This can be demonstrated in the case of Lenovo’s Smart Home Essentials, which is a line of smart home devices that are controlled through Apple’s Home app or Siri without the need for a Wi-Fi bridge. There are also dedicated smart home hubs that are offered as standalone platforms to connect different smart home products and these include the Amazon Echo, Google Home, Apple’s Home Pod, and Samsung’s SmartThings Hub. In addition to the commercial systems, there are many non-proprietary, open source ecosystems; including Home Assistant, Open HAB and Domoticz.

One key application of a smart home is to provide assistance for those with disabilities and elderly individuals. These home systems use assistive technology to accommodate an owner’s specific disabilities. Voice control can assist users with sight and mobility limitations while alert systems can be connected directly to cochlear implants worn by hearing-impaired users. They can also be equipped with additional safety features. These features can include sensors that monitor for medical emergencies such as falls or seizures. Smart home technology applied in this way can provide users with more freedom and a higher quality of life.

The Internet of Medical Things (IoMT) is an application of the IoT for medical and health related purposes, data collection and analysis for research, and monitoring. The IoMT has been referenced as “Smart Healthcare”, as the technology for creating a digitized healthcare system, connecting available medical resources and healthcare services.

IoT devices can be used to enable remote health monitoring and emergency notification systems. These health monitoring devices can range from blood pressure and heart rate monitors to advanced devices capable of monitoring specialized implants, such as pacemakers, Fitbit electronic wristbands, or advanced hearing aids. Some hospitals have begun implementing “smart beds” that can detect when they are occupied and when a patient is attempting to get up. It can also adjust itself to ensure appropriate pressure and support is applied to the patient without the manual interaction of nurses. A 2015 Goldman Sachs report indicated that healthcare IoT devices “can save the United States more than $300 billion in annual healthcare expenditures by increasing revenue and decreasing cost.” Moreover, the use of mobile devices to support medical follow-up led to the creation of ‘m-health’, used analyzed health statistics.”

Specialized sensors can also be equipped within living spaces to monitor the health and general well-being of senior citizens, while also ensuring that proper treatment is being administered and assisting people to regain lost mobility via therapy as well. These sensors create a network of intelligent sensors that are able to collect, process, transfer, and analyze valuable information in different environments, such as connecting in-home monitoring devices to hospital-based systems. Other consumer devices to encourage healthy living, such as connected scales or wearable heart monitors, are also a possibility with the IoT. End-to-end health monitoring IoT platforms are also available for antenatal and chronic patients, helping one manage health vitals and recurring medication requirements.

IoT devices can be used to monitor and control the mechanical, electrical and electronic systems used in various types of buildings (e.g., public and private, industrial, institutions, or residential) in home automation and building automation systems. In this context, three main areas are being covered in literature:

The integration of the Internet with building energy management systems in order to create energy-efficient and IOT-driven “smart buildings”.

The integration of smart devices in the built environment and how they might be used in future applications.

How is IoT changing the world? Take a look at connected cars.

IoT is reinventing the automobile by enabling connected cars. With IoT, car owners can operate their cars remotely—by, for example, preheating the car before the driver gets in it or by remotely summoning a car by phone. Given IoT’s ability to enable device-to-device communication, cars will even be able to book their own service appointments when warranted.

The connected car allows car manufacturers or dealers to turn the car ownership model on its head. Previously, manufacturers have had an arms-length relationship with individual buyers (or none at all). Essentially, the manufacturer’s relationship with the car ended once it was sent to the dealer. With connected cars, automobile makers or dealers can have a continuous relationship with their customers. Instead of selling cars, they can charge drivers usage fees, offering a “transportation-as-a-service” using autonomous cars. IoT allows manufacturers to upgrade their cars continuously with new software, a sea-change difference from the traditional model of car ownership in which vehicles immediately depreciate in performance and value.

SwiftTalk Limited is a company that has been conceptualized to provide and focus on the growing and emerging telecommunications industry in Nigeria. The solutions and services feature provided by the company are;

Did you know? SwiftTalk Limited provides Smart home & Office Solution. Our professional team of Engineers are available to make the configuration seamlessly for you in reducing complexity and improving the user experience to make it enjoyable and beneficial for users of all types and technical levels.

The Best Security Systems To Protect Your Home And Office
August 31, 2022

Choosing the right Connectivity for your IOT use Cases
March 9, 2022