Wi-Fi 6 – Taking Wi-Fi Experience to the Next Level 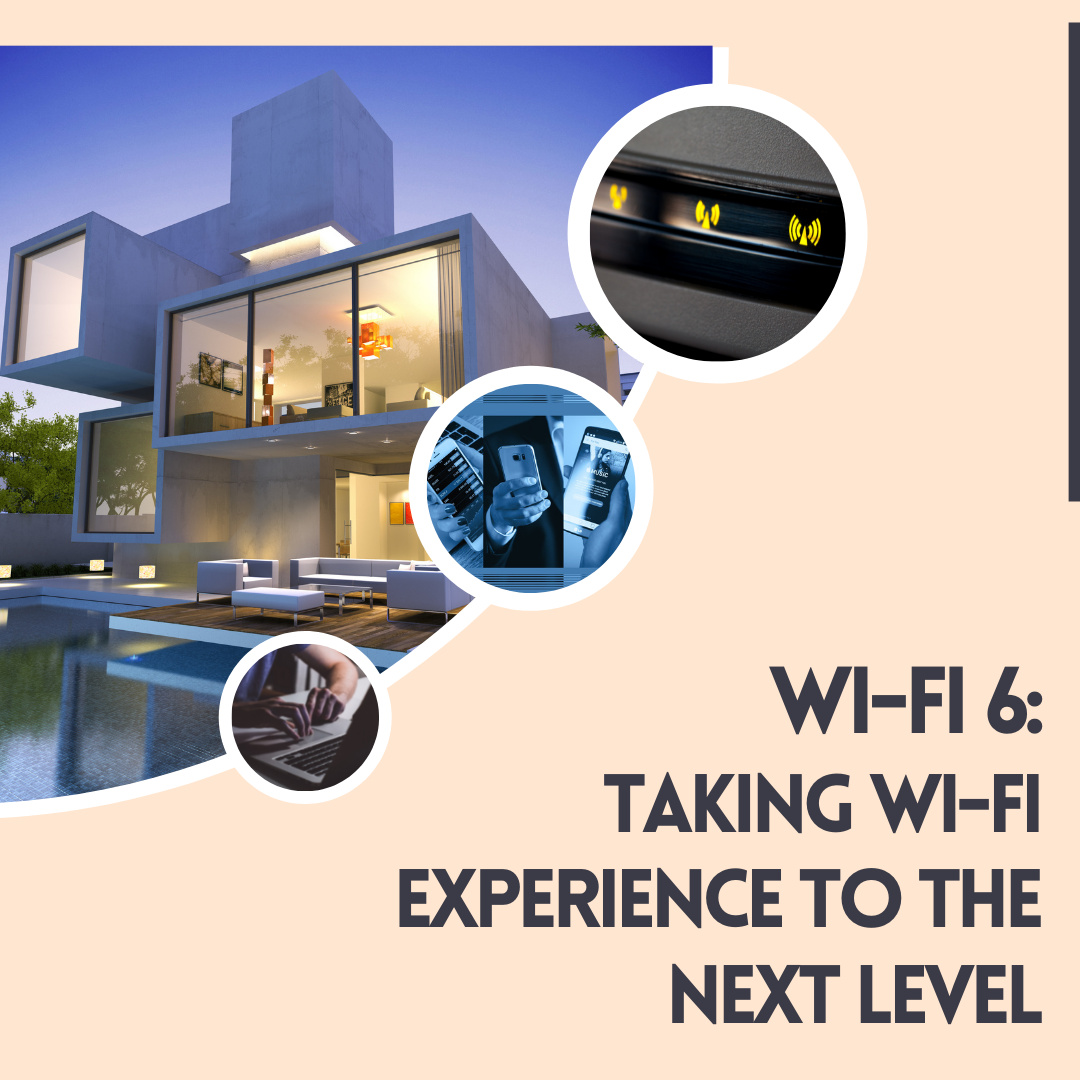 Today, IoT (Internet of Things) and mobile devices are rapidly knocking on our doors. Connectivity and mobile data usage are mainstream. However, the need to deliver internet quickly and robustly is becoming more and more urgent as we face an explosion of devices and users.

Wi-Fi has experienced rapid developments and changes over the last few years, and the new Wi-Fi 6 is not slowing down! But what does it mean for us, and more importantly, what will we be able to do that we couldn’t before?

Click to know more about our Smart Home & Office Technology?

Wi-Fi 6 is the latest upgrade over previous generations, which is also referred to as 802.11ax. Unlike its predecessors, Wi-Fi 6 isn’t about boosting the speeds for individual devices. This 6th generation of Wi-Fi focuses particularly on improving the performance of the network when many devices are connected.

So, what exactly is Wi-Fi 6 all about?

To make a significant generational leap in Wi-Fi performance, we need a way to improve the efficiency of the underlying MAC layer. This is what IEEE 802.11ax will bring, with a promise of Orthogonal Frequency Division Multiple Access (OFDMA), higher throughput and lower latency. This, of course, is the crux of the 802.11ax standard: improve efficiency and capacity over data rates and wider channels. In this new amendment, a station detects data frames to send out on its wireless link by using a “list” of frame types—similar to how an email client sorts messages into different folders based on their type so you can choose which ones to open.

How is Wi-Fi 6 better than its predecessors?

The earlier generations focused on increasing data rates and channels but failed to address efficiency. Wi-Fi 6 is all about more efficient use of existing radio frequency medium. Orthogonal Frequency Division Multiplexing (OFDM) is a technique that was widely used in the previous standards. It divides a channel in subcarriers which helps in preventing the inter-channel interference. However, the entire channel is used for transmission irrespective of the packet size and thus makes OFDM inefficient when you have shorter data to send, which maybe the case very often in real time. Wi-Fi 6 solves this issue with the help of Orthogonal Frequency Division Multiple Access (OFDMA), a multi-user version of OFDM. OFDMA divides and allocates the subcarriers to different clients for simultaneous transmission. It allocates the unused channel to another client and thus makes effective utilization of channel.

SU-MIMO (single user), as the name suggests, is a technology that allows communication with multiple devices but only with one device at a time. This means each device has to wait for its turn to communicate with the access point. MU-MIMO (multi user) is a game-changer here, it enables communication with multiple devices at the same time. Although MU-MIMO was introduced in Wi-Fi 5 (802.11ac) as well, the prime difference between the two (Wi-Fi 5 MU-MIMO and Wi-Fi MU-MIMO) is the number of clients that can communicate with an access point simultaneously. Wi-Fi 5 can support four MU-MIMO clients while Wi-Fi 6 is capable of supporting up to 8×8:8 MU-MIMO clients.

Some other significant features of Wi-Fi 6

BSS Colouring: With the growing high-density Wi-Fi networks, there is a need to improve how they work. This is where BSS Colouring is needed. With BSS Colouring, Wi-Fi 6 can intelligently assign each network on a channel its own covertly reserved virtual space without having them interfere with each other, while minimising packet loss between them. This improves co-existence of overlapping BSSs and allows spatial reuse within one channel.

Target Wake Time: Another feature of Wi-Fi 6 worth mentioning, Target Wake Time (TWT), allows battery powered IoT devices to communicate with their access points more efficiently and under less load. It allows an access point to define a specific time or set of times for IoT devices to access the wireless network. Scheduling and resource allocation helps in improving device battery life, this means that everyone has a better Wi-Fi experience and can use their device longer.

WPA3 Security: With so many things to consider when developing Wi-Fi 6, there are bound to be some growing pains. But with the adoption of WPA3 security framework, which will eventually supersede vulnerable WPA2, we will be seeing admirable security and convenience features to better secure personal, enterprise and IoT wireless networks.

Speed: Wi-Fi 6 access points could hit speeds over 250% faster than the previous standard. Theoretically, users should be able to achieve 9.6Gbps but practically you probably won’t see that because your computer or phones are not yet designed to send and receive data that fast.

Our products in the Wi-Fi 6 Space

Swifttalk Limited has always been on the lookout for new innovations so that we can keep up with the blistering pace of today’s technology. We have an extensive set of indoor and outdoor access points and our latest 802.11ax based access points designed specifically for high-density environments, are all set to meet the demands of the modern enterprise networks.

SwiftTalk Limited, we are Service providers poised to provide wireless coverage to anyone and everyone in the present and wherever the future takes us.

5 performance metrics that are actually important to track
February 16, 2022