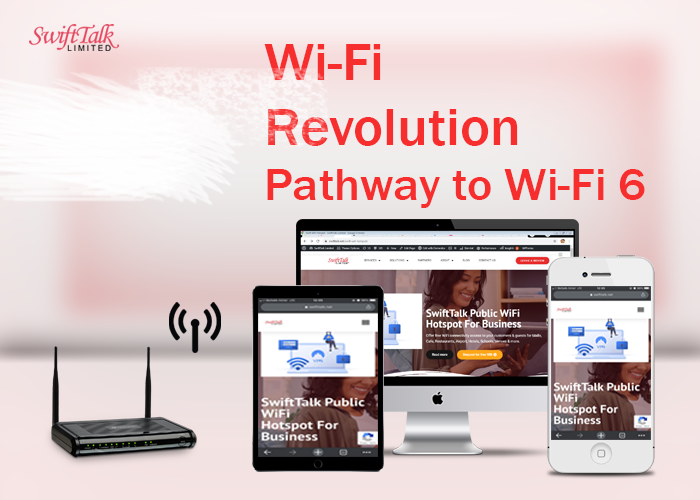 The sense of excitement and potential, we stand at the brink of a transformation. It is a moment that echoes the birth of the Internet in the mid-’70s, when the radical pioneers of computer networking – machines talking to each other! – hijacked the telephone system with their first digital hellos. Or that jaw-dropper a decade later when the FCC official whose job it was to track the growth of communications networks suddenly realized that his neat tabulation of local and long-distance had been made moot by the unforeseen rise of local-area networks: an unregulated, unmonitored, uncontrollable phenomenon of the upstart PC industry that would soon shake the telecom world. Or the arrival of the Web browser, which blew millions of minds, making a mouse click feel like teleportation.

Believe it or not, there was a time when if you wanted to get on the Internet your only option was to have a phone cable or Ethernet cable plugged directly into your computer or laptop.

This time it is not wires but the air between them that is being transformed. Over the past three years, a wireless technology has arrived with the power to totally change the game. It’s a way to give the Internet wing without licenses, permission, or even with little fees. In a world where we’ve been conditioned to wait for cell phone carriers to bring us the future, this anarchy of the airwaves is as liberating as the first PCs – a street-level uprising with the power to change everything.

The technology is Wi-Fi, and it’s the first blast in a revolution, called open spectrum, that will drive the Internet to the next stage in its colonization of the globe. Like the Net itself, Wi-Fi was confined to technical circles for years before exploding into the mainstream, seemingly out of nowhere. Over the past years, it’s become one of the fastest-growing electronics technologies in history.

What makes the new standard so alluring? Wi-Fi is cheap, powerful, and, most important, it works. A box the size of a paperback, and costing no more than dinner for two, magically distributes broadband Internet to an area the size of a football field.

In 1985, the technology called 802.11 was made available for use due to a U.S. Federal Communication Commission ruling, which released the three bands of the radio spectrum now used for nearly all wireless communication: 900 MHz, 2.4 GHz, and 5 GHz. Shortly thereafter the IEEE (Institute of Electrical and Electronics Engineers) and the Wi-Fi Alliance (originally called WECA or the Wireless Ethernet Compatibility Alliance) were formed to help develop and regulate wireless technology worldwide.

When the IEEE was formed in 1990, they chose Vic Hayes, also popularly known as the “Father of Wi-Fi,” as its chairman. For the next ten years, Hayes helped direct the development of new wireless protocols as well as market the technology worldwide. His leadership and progressive thinking allowed the Wi-Fi Alliance to spearhead the regulation and widespread use of wireless technology.

The first version of the wireless protocol’s legacy is now obsolete and would be considered dreadfully slow by today’s standards. It had a maximum data transfer rate of 2 Mbps, or Megabits per second. Most applications created today would not be able to operate efficiently at those speeds.

In 1999, 802.11a and 802.11b were released, and for many years were the standard for Wi-Fi networks. They both operated in the 2.4 GHz range of the radio spectrum, but, unlike 802.11, they were able to transmit data at a much higher rate. The 802.11a protocol could support data transmission up to 54 Mbps, but was designed for much shorter ranges at a much higher cost to produce and maintain. On the other hand, 802.11b had a much lower cost and much longer range than its counterpart, but worked at a much slower speed, maxing out at 11 Mbps. Because both protocols operated in the unregulated 2.4 GHz bandwidth, they were susceptible to interference from other appliances that used the same frequency such as microwave ovens, cordless phones and wireless keyboards.

In 2003, 802.11g was introduced as the new standard. This new protocol was designed to combine the best of the previous transmission standards—operating at a maximum transfer rate of 54 Mbps while still allowing for the longer range and lower costs. Most devices that incorporate the (g) technology are fully backwards compatible, allowing the use of all three protocols in one device.

The adaptation of 802.11n, sometimes called Wireless-N, saw a huge leap forward in the technology. With the ability to transfer data up to 300 Mbps and the incorporation of multiple wireless signals and antennas (called MIMO technology), people could surf the web even faster and with more stability. The new protocol also allowed data to be transmitted on both the standard 2.4GHz frequency as well as the less populated 5GHz which led to a stronger signal and less interruption.

The latest technology, 802.11ac, proved to be another huge leap forward. With the advancements in dual-band technology, data can now be transmitted across multiple signals and bandwidths allowing for maximum transmission rates of 1300 Mbps with extended ranges and nearly uninterrupted transmission.

Wi-Fi 6 is the next-generation wireless standard that’s faster than 802.11ac. More than speed, it will provide better performance in congested areas, from stadiums to your own device-packed home.

The main goal of this standard is enhancing throughput-per-area in high-density scenarios, such as corporate offices, shopping malls and dense residential apartments. While the nominal data rate improvement against 802.11ac is only 37%, the overall throughput improvement (over an entire network) is 400% (hence High Efficiency). This also translates to 75% lower latency.

The quadruplicating of overall throughput is made possible by a higher spectral efficiency. The key feature underpinning 802.11ax is orthogonal frequency-division multiple access (OFDMA), which is equivalent to cellular technology applied into Wi-Fi. Other improvements on spectrum utilization are better power-control methods to avoid interference with neighboring networks, higher order 1024‑QAM, up-link direction added with the down-link of MIMO and MU-MIMO to further increase throughput, as well as dependability improvements of power consumption and security protocols such as Target Wake Time and WPA3.

Technology continues to advance at faster and faster rates, making the once amazing seem commonplace. However, it is always good to remember how those technologies started and the innovators that created them. The future of Wi-Fi is predicted to have the potential for even faster speeds and increased stability. Data speeds now make it possible to allow voice and video calls to be transmitted over wireless networks reliably, which can often lead to great savings in phone bills.

SwiftTalk WiFi Hotspot, we are Service providers poised to provide wireless coverage to anyone and everyone in the present and wherever the future takes us.