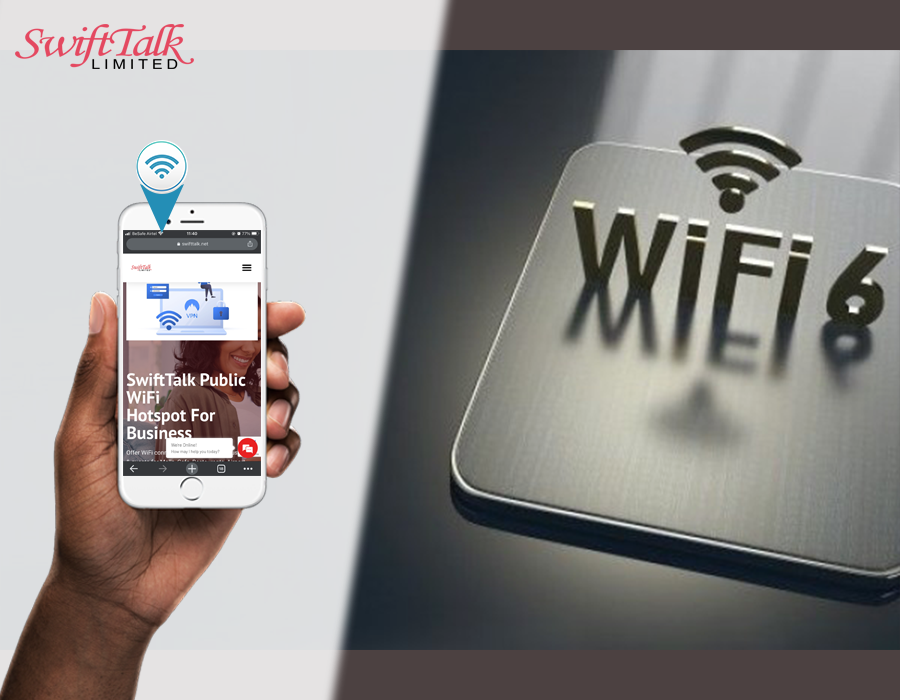 Wireless networking has been continuously evolving every few years to support growing consumer requirements. WiFi 6 or IEEE 802.11ax, is the newest generation WiFi specification standard. It comes as the successor to 802.11ac, or WiFi 5. WiFi 6 is built atop the foundations of what 802.11ac has to offer, taking some of its principles and tweaking it to support high level networking performance. As the number of devices goes on increasing exponentially, we need to have wireless performance that supports this demand.

IEEE defined 802.11ax standard can operate between 1 – 6 Ghz. However, WiFi 6 can work over the previously allotted frequency bands— 2.4 Ghz and 5 Ghz. The primary differences between these two bands are of speed and range. The 2.4 Ghz band offers more range but lesser speeds whereas the 5 Ghz band offers more speeds but lesser range because of the high frequency inability to penetrate solids.

802.11ax benchmarked four times more speeds than 802.11ac. It can also communicate with a much higher density of devices with relative ease. Throughput is four times higher than in the previous wireless standard 802.11ac. It also has a 75% decrease in latency.

However, one of the most important features of 802.11ax is its use of OFDMA, which is Orthogonal Frequency-Division Multiple Access. It has been improvised from OFDM, or Orthogonal Frequency-Division Multiplexing. What OFDMA essentially does is that it divides a channel into subdivisions of frequencies called resource units or RUs, and these subdivisions then interact with different users exclusively, which is in simple terms a parallel communication through a single window, scaled as per the requirement of the user. This greatly improves network efficiency due to reduced congestion and reduced latency. OFDMA works for both uplink and downlink. OFDMA is better suited for a multiple device environment where data latency is needed to be as low as possible. In a high density environment, where there can be bottlenecks while communicating, OFDMA can play huge role in optimising data transmission.

802.11ax also offers support to MU-MIMO, which is Multi-User Multiple-Input Multiple-Output, a feature carried over from its predecessor 802.11ac. MU-MIMO, like OFDMA, allows interaction with multiple devices, the major difference is that MU-MIMO uses spatial streams to interact with devices, and assigns a dedicated channel to each device. In 802.11ax, MU-MIMO has extended support for 8 devices simultaneously. MU-MIMO is usually suited for operations or actions that require a higher bandwidth like streaming High-Definition video.

WiFi 6 comes with a feature called Target Wake Time, a downscaled version of this feature was first found in WiFi HaLow, an extension of 802.11ah, as the ‘Wake Time’ feature. Target Wake Time is simply a resource scheduler. It allows devices to determine at what time, or how frequently they will transmit data and communicate that information with the Access Point. What this does is that it allows devices to go into sleep mode whenever they are not transmitting data, therefore saving battery life and using the available bandwidth efficiently.

WiFi 6 also supports 1024 – QAM (Quadrature Amplitude Modulation). 1024-QAM is a modulation technique that helps increase throughput by allowing transmission of more data bits. However, in order to make good use of 1024-QAM, very low presence of noise of all types is necessary. It provides an approximately 40% increase in data rate from WiFi 5. Theoretical data rates for 802.11ax WiFi standard have gone up to 11 Gb/ps.

Basic Service Set Colouring, also introduced initially in 802.11ah, assigns each Access Point a unique colour, this unique colour is also assigned to every member connected to that Access Point in the BSS. This makes it easy to distinguish communication between the connected AP and the neighbouring AP. This distinction helps improve battery life of ubiquitous devices connected to the AP because it simply ignores the transmission from another APs.

What are the advantages of WiFi 6?

There are many key benefits of WiFi 6 over its predecessors. For one, it offers increased data rates. As the density of devices keeps growing every year, and is expected to only grow in the coming years too, WiFi 6 is geared with the capacity to handle that density of devices seamlessly, providing every device with an uninterrupted experience. OFDMA enables WiFi 6 to improve efficiency in high density environments by allocating resource units to devices as required. This bandwidth scalability optimises data transmission as well as throughput to individual clients. OFDMA will play a big role in managing devices in an Internet-Of-Things powered environment where hundreds of smaller devices are connected to the network in an enterprise ecosystem. Features such as TWT, and BSS Colouring aid battery management and enhancement of battery life to quite a large extent. From a security perspective, WiFi 6 zooms ahead of this predecessors by making compulsory WPA3 as the primary security protocol on WiFi 6 certified devices. Moreover, as mobile networks grow, the world will desperately need to offload some of that data on to WiFi networks to ensure smooth communication. Some telecom companies today have WiFi calling to reduce congestion and load on the mobile network.

Why should you care about WiFi 6?

WiFi 6 presents itself as a reliable, functional networking aspect of several use cases that will exist in almost every ecosystem in the coming two years. In a home ecosystem where 4 or 5 individuals interact with the network, WiFi 6 offers very high uplink and downlink, meaning very high data rates. Streaming of High-Definition videos, playing graphic intensive online games, downloading high volume movies, all is made easier through WiFi 6. In a smart home environment where several ubiquitous computing devices have to work together, WiFi 6 can facilitate that as well. WiFi 6 offers support for the 2.4 Ghz frequency band which is perfect for a home environment.

Deployment of WiFi 6 on an enterprise level is particularly enticing because the number of connected devices in such environments is really high, and the demand for consistent and dependable connectivity is necessary. In such cases, for large ecosystems like buildings, office campuses, WiFi 6 can be scaled to provide full-building internal coverage of WiFi to employees.

McKinsey suggests that by 2023, IoT-connected devices will increase to a whopping 43 billion. IoT devices, many of them mostly low-powered, require efficiency in battery management. Equipped with OFDMA and BSS colouring, WiFi 6 is the perfect contender to deploy in such environments.

Another interesting use case of WiFi 6 is Public WiFi. Public WiFi has been touted as an absolute necessity to ensure ease of living. Public WiFi, where hundreds of devices, different in their requirements from the network, of varying density, are connected, resource management and allocation becomes imperative and first priority. WiFi 6 can serve this purpose efficiently.

WiFi 6 as the latest standard in wireless networking is highly developed and improvised from previous standards. It serves different purposes, for different ecosystems, based on different requirements. Globally, companies have started rolling out devices that support WiFi 6 and 5G. While it is largely true that 802.11ac currently serves many use cases well, as the volume of data increases and so does the demand for faster wireless networks, 802.11ax will be needed to fill that gap. Faster communication will be an imperative for growing connectivity. Sans that, it might be futile to even try to scale devices pervasively.

Technology continues to advance at faster and faster rates, making the once amazing seem commonplace. However, it is always good to remember how those technologies started and the innovators that created them. The future of Wi-Fi is predicted to have the potential for even faster speeds and increased stability. Data speeds now make it possible to allow voice and video calls to be transmitted over wireless networks reliably, which can often lead to great savings in phone bills.

SwiftTalk Limited, we are Service providers poised to provide wireless coverage to anyone and everyone in the present and wherever the future takes us.

Television And Its Technological Advancement
December 14, 2022