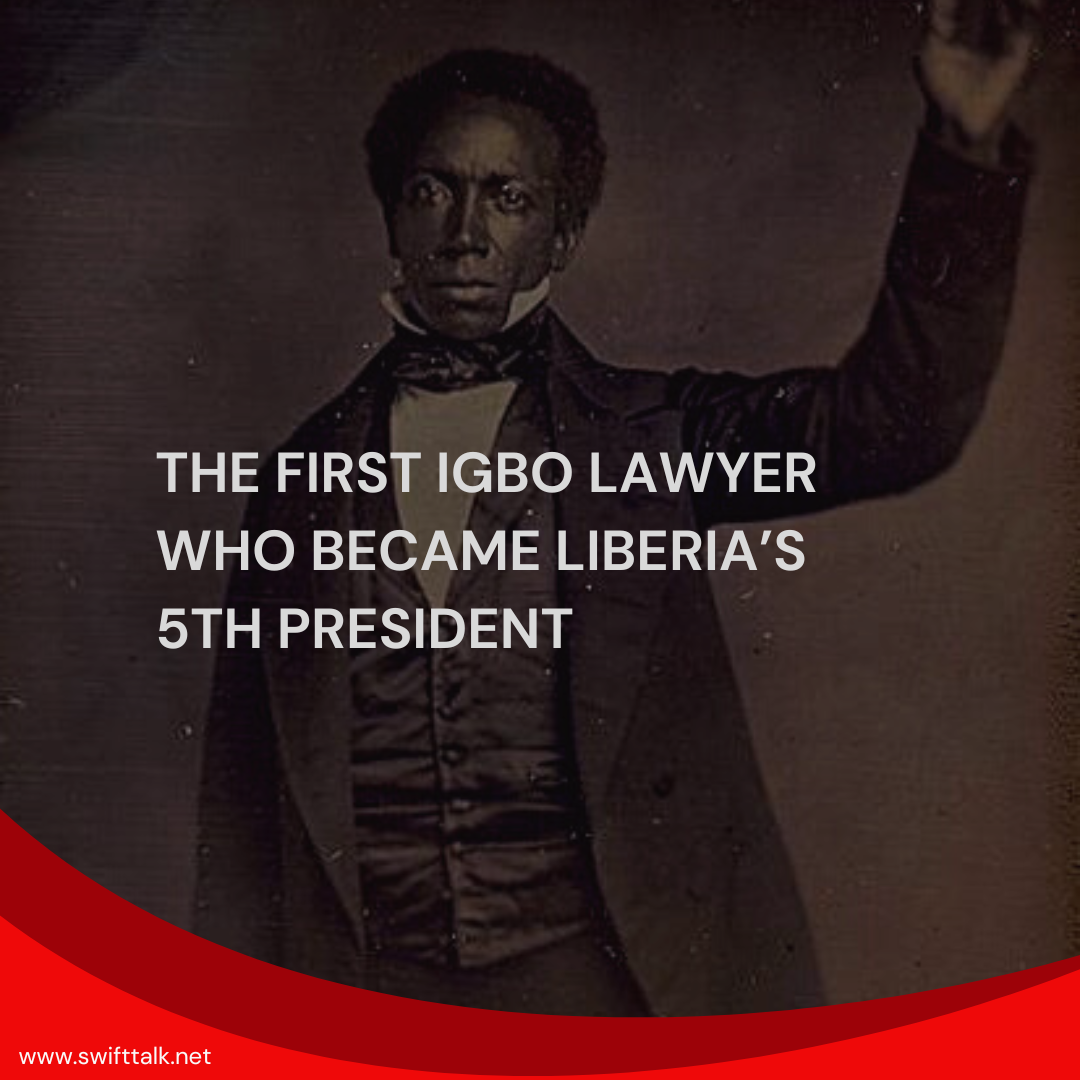 In Nigeria, colonialism started with slave trade which began around 15th century. This didn’t spare anybody, as many Nigerians and other Africans were sold to different first class countries of the world. On the course of serving their slavery masters some of them were subjected to change of names and many other things that is odd to their personal wish.

Despite the hard labour and ill-treatment that the slaves were being subjected to, many of them eventually became prominent persons in the world. Like bishop Ajayi Crowther and the rest.

John Roye the father of Edward James Roye, was one of those sold to American slave trader. John Roye, was an Igbo slave in Ohio, America who later gained his freedom and became an illustrious merchant with considerable wealth and land in many cities.

His son Edward James Roye has been celebrated as the first pure black person to become president of Liberia, Roye was a “pure descendant of the Igbo tribe from Nigeria”.

Edward, is noted in Nigeria as the first recorded lawyer of Igbo descent in history. In Liberia, however, Edward James Roye is well-known as the country’s fifth president whose administration was short-lived and who died under rather mysterious circumstances.

Edward James Roye was born on February 3, 1815, in Newark, Ohio. Benefitting from the financial standing of his family, he attended one of the best schools – Ohio University in neighbouring Athens, Ohio.

When his father died in 1836, Roye relocated to Terre Haute where he became famous for establishing the largest barber shop in the community, boasting a 79-foot (24 m) high barber pole, “the tallest in western Indiana” .

In the midst of his fame and success was the American Colonization Society that was then encouraging free African-Americans to move to the colony of Liberia in West Africa to live in a “prejudice-free nation”.

However, not having any ties to the United States, after the death of his mother in 1840, Roye decided to make that journey. On May 2, 1846, at the age of 31, he left New York with the rest of his family and on June 7th they arrived in Monrovia, Liberia’s capital.

There, he improved rapidly both in business and otherwise. Within two years, he was already Liberia’s top shipping merchant. He also became active in Liberian politics and by 1849, he was the Speaker of the Liberian House of Representatives as well as Chief Justice of the Supreme Court of Liberia from 1865 until 1868.

Edward James Roye was one who once said that Liberia was
“decreed to champion the black race and should be governed only by ‘pure Africans'”.

Nigeria is a country made up of three major ethnic group, over 350 tribes and many ancient kingdoms. However among these kingdoms that have survived up till today, it may interest you to know the oldest among them. Read more…

In 1870 Roye was elected president of Liberia. This made him the first member of Liberia’s True Whig Party (oldest political party in Liberia founded by Americo-Liberians) to serve as President.

“I do not expect immunity from the criticisms of our opponents, nor do I ask for it,” Roye said in his inaugural address.

The Ohio Historical Society refers to Edward James Roye as the “ninth and forgotten president from Ohio.” While in a land far away from the “land of Legend” he is known by some as the “Lincoln of Liberia.”

Five (5) dollar note of the Liberian currency has the portrait of Edward James Roye.

This is really interesting, lets hear from you in the comment box.

Swifttalk Limited offers range of services, to individual and corporate organization across the country.

Contact us today to know how we can help you grow your business.