The History of Akure Kingdom 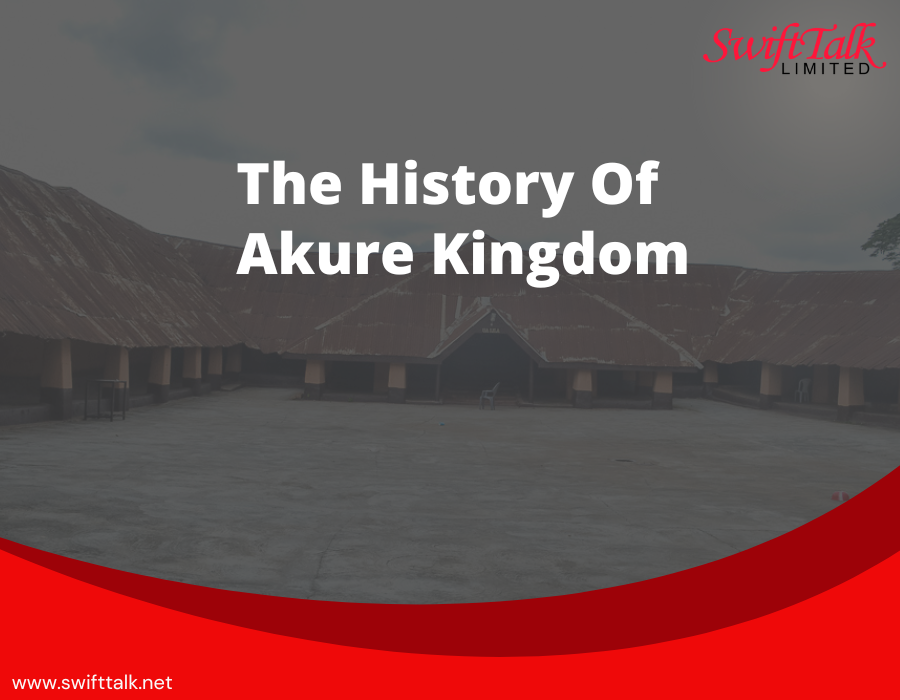 According to oral traditional analogy, it is known that Akure was founded by a prince named Omoremi, the son of Ekun and grandson of Oduduwa Omoluabi, who is the royal progenitor of the Yoruba tribe. Prince Omoremi after passing a strict test which was administered by Oduduwa himself, left Ile-Ife, his grandfather’s kingdom, in search of a place to settle. The test in which he was kept in isolation for about nine (9) days is still an annual commemoration known as ‘Oba wo ilesunta’ in the town of Akure by the present reigning king.

When the prince and his entourage arrived at the exact location of the modern city, the string holding the heavy royal beads on his neck is said to have snapped, thus causing the people to exclaim “Àkún rę” (meaning, The beads have snapped), this later become the name of the settlement they established on the site. Over time, the phrase was whittled down through its constant use to become Akure.

Prince Omoremi is said to have hunted with his entourage while on his way from Ile-Ife. He arrived in Akure and was proclaimed the Person who hunted and arrived with royalty, i.e., Asodeboyede. Initially, the kings of Akure that were born of him were referred to as Ajapada. The title Deji of Akure started with Oba Arakale, whose father took the daughter of Oba Atakumosa, the Owa of Ijesha land as one of his wives while the latter was on his way to Benin.

When Oba Atakumosa returned to Ilesha from the pilgrimage, his daughter (Owawejokun) had given birth to a son.

While other dignitaries gave the little baby common gifts, Oba Atakumosa was said to have presented his grandson with a small diadem. Owafadeji i.e., Owa gave him a diadem or royal crown which became the nickname of the young boy, and by the time he has grown to adulthood it had become his de facto name. When Owafa’Deji became Oba, the appellation assumed a titular importance and because of his prominence as an Oba, subsequent Obas or kings of Akure assumed the title. Following this progress and process, the modern era formally made Deji the official title of the Obas of Akure. Meanwhile, the original title of Ajapada has remained a significant part of the Deji’s ceremonial style in the present day of Akure.

In the centre of the town is the Oba’s Palace which was built in 1150 AD. During this period, the city-state of Akure was some times independent, some times subject to other states. There is a sizable population of Bini origin. Akure was the main base for Benin’s trade in the area, and at times seems to have been considered within the western frontier of Benin. The Benin historian Egharevba refers to suppression of resistance by “rebellious Akure” during the reign of Oba Ewuare of Benin (1440–1473), although the king was allowed to remain as nominal ruler. During the reign of Oba Ehengbuda of Benin, another rebellion was also recorded a century later.

By the early 19th century, Akure kingdom had regained independence  but around 1818 it was recaptured by Benin forces and the Deji was executed. After 1854, Akure and other Ekiti towns came under the rule of Ibadan, which lasted for a while until 1876 rebellion as a result of a prolonged war between the Yoruba states.

Towards the end of the 19th century the British based on their Lagos Colony had established a protectorate over the area, although they ruled through “native” administrations. The British sought to combine the Ekiti kingdoms of the region into a single administrative unit, but it was resisted by the Ekiti people who preferred local autonomy. In 1899 Ekiti and Ilesha formed the northeastern division of the protectorate.

In 1915, Ondo Province was formed comprising; Ekiti, Owo and Ondo, with Akure as the headquarter. Ondo Province later became part of Western State. In 1976 the old Ondo State was created by the then federal government following state creation, and in 1996 Ekiti State was split off from the modern Ondo State, which has Akure as its capital.

The  indigenous people of Akure are fondly called “Omo Akure Oloyemekun a mu ida s’ile m’ogun enu pani” (meaning sons and daughters that sheathed the sword and kill with mouth). The indigenes of  Akure are also commonly known to regard themselves as Omo Ekun meaning: son of a tiger.

Always remember to contact  Swifttalk Limited for your internet powered services. We provide services nationwide even in Akure.