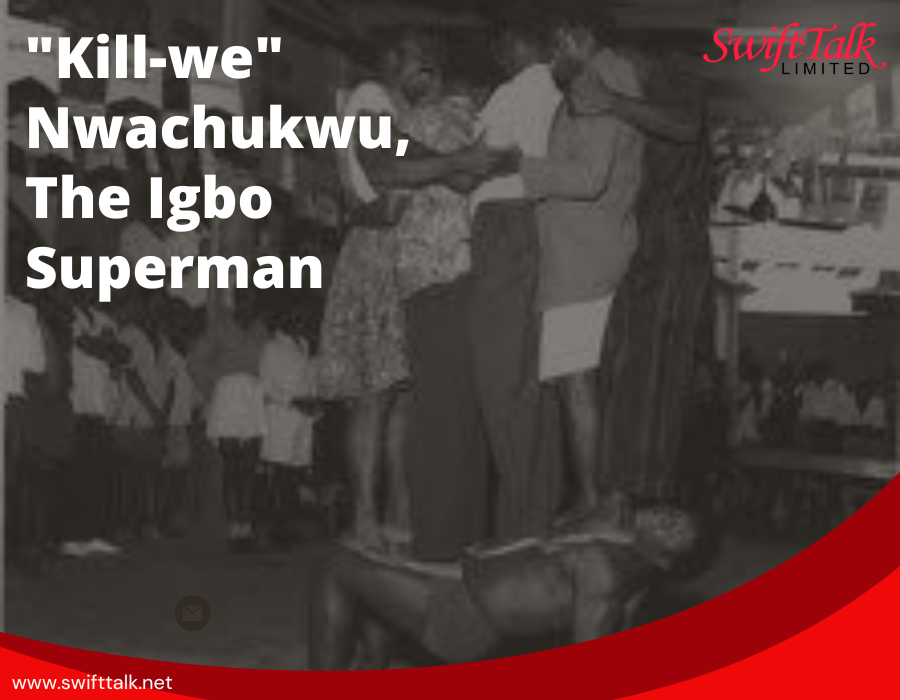 For God the supreme being, it pleases Him to bless and give each and every human being a special gift. This gift do manifest in different ways. However, many people believe that for God’s gift to manifest in one’s life, you have to work it out and put enough effort before the latent power will be manifested, while others believe that since God has given you a natural gift, it will manifest apparently without much or no hustle.
However, let’s examine the life of one those that God’s natural gift has manifested in their life, the man kill-we Nwachukwu.

Uzoma Nwaozuzu Nwachukwu, was an Igbo Superman. He was born in 1931 in Mbaitolu LGA of Imo state.
Uzoma Nwaozuzu Nwachukwu was nicknamed “Killi-we” Nwachukwu because of his enormous natural strength.
He was celebrated for more than three decades as a homegrown Nigerian superman. In his time, people normally travel from the nearby community to watch him showing his prowess in different styles. In some occasions of watching Kill-we Nwachukwu, some will pay entrance fee to enable them have a sight of him, while for others if they heard that he is coming to their school or village they will run away for the fear of Kill-we not killing them at any peradventure.
Most of his legendary feats of strength that lifted him includes; lifting of buses, having cement blocks crushed on his head, allowing cars to drive over his body, using teeth to carry bags of cement, using teeth to drag a car with a rope, using bare hands to hammer nails, breaking coconuts on his head, six people standing on his body at the same time, and many mmore.

How He Got His Nickname “Killi-we”.

Uzoma Nwaozuzu Nwachukwu, got his nickname “Killi-we” after a fight with a stubborn man called “Tick man”.
Nwachukwu who is known to push a wooden two wheel truck with which he conveyed merchandise for individuals.
On one fateful day he conveyed a truck load of goods from the market to the man’s house. After dropping off the goods, the man refused paying what Nwachukwu charged him claiming it was on the high side. He tried to walk away and Nwachukwu grabbed him by hand insisting he must pay. From this disagreement, a fight erupted and he outmuscled the man and pinned him to the ground.
Subsequently the man’s wife ran in and came out with a wooden pestle to assist her husband. Nwachukwu snatched it from her, lifted the woman up and pinned her on top of her husband on the floor. Feeble, she began shouting, “Killi we o! Nwachukwu, You should killi we o!”, which means, Nwachukwu, kill us!. This was how his nickname came about.
His strength came from eating local food like, Akpụ, Ji & not diabolical as many insinuated.
In an Igbo household, if a child is fearsome and seems to be the strongest among his siblings, or beating up his peers and siblings unchallenged, the parents will tag you as “Killi-we Nwachukwu”.
Kili-we Nwachukwu had six wives and seven concubines including a Spanish woman whom he met on one of his world tours but returned back to Europe upon seeing his other wives. He has 19 surviving children.

The death of Killi-we Nwachukwu:

Death, they said its an inevitable debt that everybody has to pay, and it cannot be escaped despite how might or powerful one may be. Before his death, he always complained of rhythmic muscle movement around his body which later metamorphosed to muscle stiffness as a result of his retirement from his superman career that shot him to fame. He resorted to traditional treatment and didn’t survive. Kill-we died on the 31st of October, 1992 in his sleep, at the age age of 61.
Killi-we, was highly revered by numerous individuals of his generation for his strength and power.
Man was so powerful that even as a corpse deposited at Aladinma mourtuary, the morticians acknowledged, “he in the night caused uproar and will carry all other corpses and stretched himself on them”. What a Power! What a man!! May he rest in Muscle.

One question that most people always ask is “why is it that none of the Imo state government has thought it wise to immortalize this Superman that has been celebrated both at home and in diaspora?. Hence, it is a question that need to be answered by the Imo state administrators both past and present.