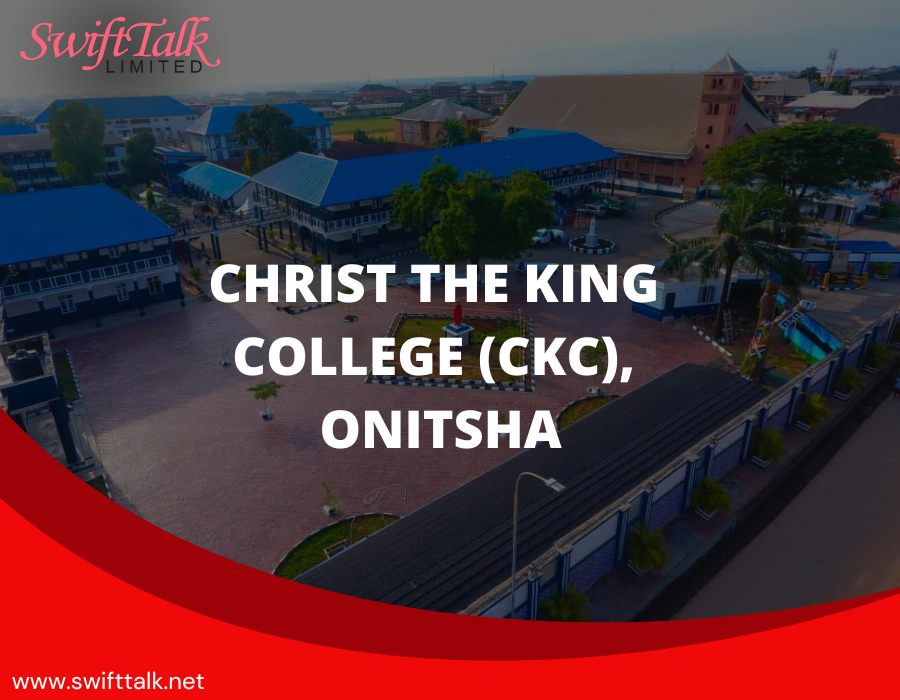 Though there are many high schools in Nigeria, few of them has distinguished themselves when it comes to academic and moral standard. This standard has enabled them to attain outstanding positions among their contemporaries.

Christ the King College, Onitsha, popularly called CKC Onitsha was founded on February 2, 1933, by the late Archbishop Charles Heerey, CSSp, and his brother Irish missionaries. Bishop Heerey remained the proprietor of the school until his death in the spring of 1967. The primary aim of the school is to develop indigenous manpower and leadership skills from the vast pool of Igbo youths and in a Roman Catholic tradition and environment. The first principal of the college was Rev Fr. Leo Brolly and the first student to be admitted into the college was Peter Charles Obi Nwagbogu.

Christ the King College, Onitsha, also called  Amaka Boys, is an all-boys secondary school in Onitsha, Nigeria. It is ranked the best high school in Nigeria and 36th in the top 100 best high schools in Africa as of February 2014 when Peter Obi was governor of the state.

During the Nigerian Civil war (1967–1970), CKC was not spared by the bad effect of the war.  Most of its infrastructure was destroyed. Consequently, the school was taken over by the then East Central State Government in 1973 and renamed “Heerey High School”, after its founder. Meanwhile, following the deliberation and  representations by its alumni, the school’s name was changed back to its original name, “Christ The King College (CKC)” in 1976, and the pre-war first indigenous principal of the school, Rev. Fr. Nicholas Tagbo, was also brought back that year to reorganize, rebuild, and re-energize the school. Finally on 1 January 2009, the state government under the administration of governor Peter Obi returned CKC to the Catholic Mission.

Throughout the years prior to the civil war, the school’s population was pegged at 600 to ensure appropriate student/teacher ratio and high-quality education. After the civil war, in the 1970s, the student population progressively increased to over 4,000. However, following years of reorganization, the school’s student population has been increasing. Though in order to ensure quality education it has a maximum number it normally admit yearly. The school is split into; Junior Secondary School and Senior Secondary School.

2. Justice Anthony Aniagolu, justice of the supreme court of Nigeria and chairman of the 1988–89 Constituent Assembly.

3. Justice Chukwunweike Idigbe, Justice of the Supreme Court of Nigeria.

5. Archbishop Valerian M. Okeke,  Archbishop of the Archdiocese of Onitsha since 1 September 2003 till date.

6. John Munonye, one of the most prolific Nigerian literary writers of the 20th century, and author of The Only Son (African Writers Series) among many others.

14. Arc. Frank Nwobuora MBANEFO, Class of 1948, renown international Architect and one of the founding members of the Nigerian Institute of Architects, of which he later became a Fellow and National President. He helped set-up the science and geography lab in CKC in 1948 and was the science tutor, before heading to England in 1950 to study architecture. He was member of the RIBA (Royal Institute of British Architects) and two-time Vice President – AFRICA of the CAA (Commonwealth Association of Architects) in 1963-1965, 1974-1977. He was an influential past national president of the CKC Alumni and worked closely with Principal Fr. Tagbo in improving CKC after the Biafran War.

15. Willie Obiano. Immediate past Governor of Anambra state, and many more others.

Obviously, CKC Onitsha has produced three governors in Nigeria. No, wonder its alumni sees CKC as the most prestigious high school in the East of the Niger.

Do you want to raise your children and or ward in an institution of high quality educational and moral standard?, where discipline, knowledge, moral value and leadership are watchwords. Look no more, CKC Onitsha is the answer. CKC Onitsha over the years has not only groomed talents of academic excellence but also noble men of leadership characters that has contributed in numerous ways for the progress of our great nation Nigeria.

Swifttalk Limited also provides Internet Enabling Services in Anambra State, contact us  today and we will provide you with the best of our service.