The Future Of The World Wide Web 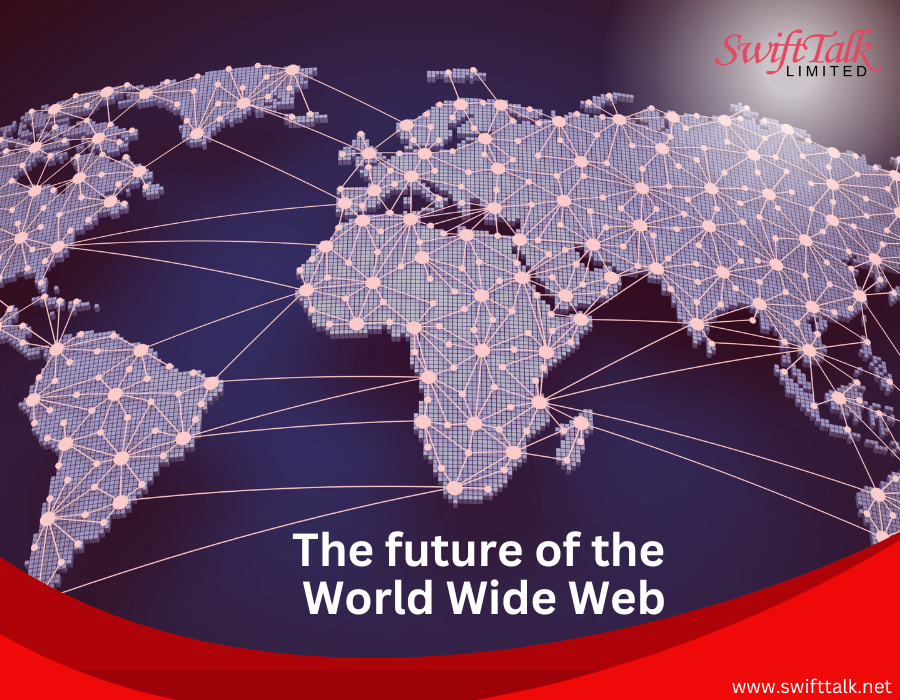 The World Wide Web (www), also called the web, can simply be referred to as an information system which enables documents and other web resources to be accessed over the Internet. Downloadable resources are also made available to the network through web servers and can be accessed by anybody at anytime with the help of web browsers.

The Web has become a source of limitless possibilities, showing us a bright future of globalized communication.

The beginning of internet can be traced back to an experiment that eventually revolutionized how we interact, shop, learn and work, and became a digital space where anyone from anywhere in the world can receive a piece of information about anything.

First there was Web 1.0, then Web 2.0, and now we see the beginning of Web 3.0, the new era of the internet that its proponents say will be unlike anything we’ve seen before. Web 3.0 is majorly build to be decentralized, unlike web 1.0 and web 2.0.

One of the outstanding idea behind Web3 is the  incorporation of  blockchain technology, such as cryptocurrencies  into the fabric of our digital world. Virtual and augmented reality also come into play, including the introduction of the metaverse. Proponents of Web3 see blockchain’s potential as a reliable and transparent way to trace data and make the internet a more accessible space for everyone.

However, on the other hand, internet just like anything with positive potential can also be used with malicious intent. Much like today, the next iteration of the web could continue to allow bad actors to carry out carefully crafted scams, harassment, abuse, false information, and identity theft potentially, on a greater increase.

As World Wide Web is seriously growing and the incorporation of web3 technologies is at its peak, one of the challenges facing the future of web is the emergence of Splinternet. Splinternet is internet regulations often imposed by different countries which block the free flow of information between nations and users. This is as due to web fragmentation. On a fragmented web, countries can decide what users can and cannot do online. Governments typically justify web fragmentation on the grounds of national security concerns. In many cases, web fragmentation is often a means for governments to stem the internet’s influence on political discourse.

Rapid increase in web fragmentation is a real threat to privacy and safety online. Hence, this pose a blockade in the future of the web.

To combat this, it is good that national policies that controls the internet and web activities of the nation should be made in consultation and partnership with the body and organizations that manages the web.

Blockchain and virtual reality technologies have their own pitfalls as well. The issue of scalability, implementation, private keys, integration with legacy systems are some of its pitfalls. Cryptocurrency mining is also a burden on the environment, though the often statement that block chain tech is the easiest way to get rich always covers the negative aspect of it. However, this technology does not meet up to its expectation.

In 2021, the Web Foundation set up a Tech Policy to understand the best way to improve on the web in today’s online world. The initiative is to identify solutions to critical issues affecting the web, including harassment, gender equality, internet access and connectivity, content moderation, internet fragmentation, privacy, and Artificial Intelligence ethics.

This was made in partnership with companies, governments, NGOs, researchers, and internet users, to create technology policies that can be adopted at a large scale and with human-centered design at the forefront.

The outcome is still somehow limited, since it is government that has the power to grant approval. But it’s hoped that by sharing lessons and best practices from across the world, stakeholders can contribute to a collective effort to make the internet safer, better, and equitable for every users.

Do not forget to visit us at Swifttalk Limited for more of this and contact us  for your internet services.