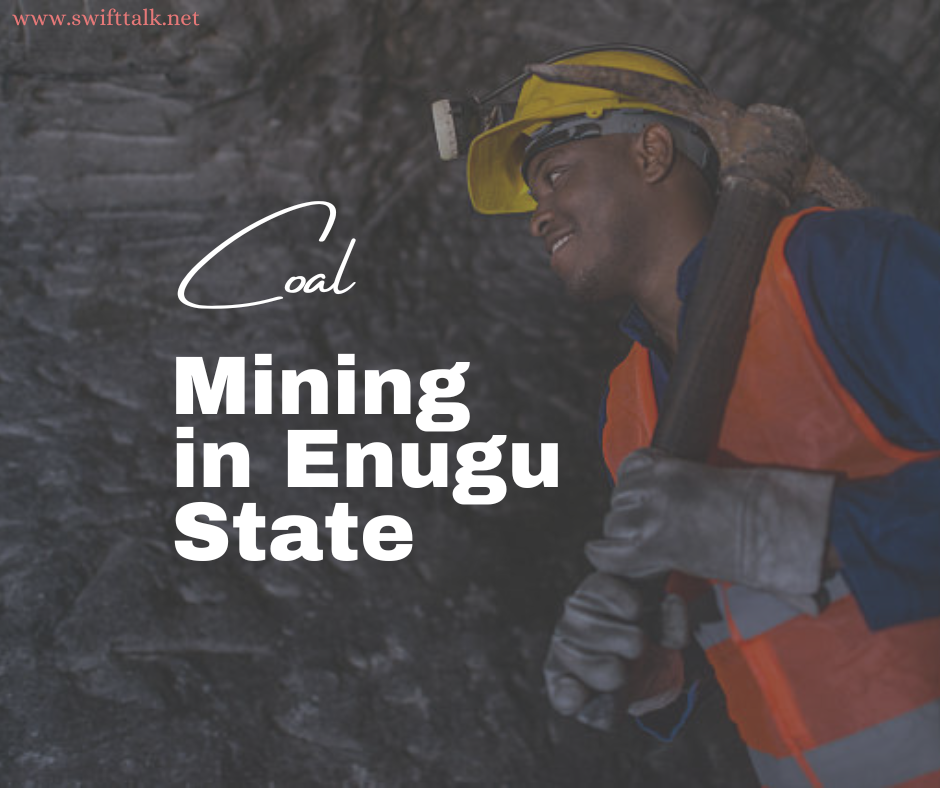 Nigeria is a country blessed with numerous mineral resources. This mineral resources which includes but not limited to coal, steel, salt, limestone, crude oil, zinc, lead can be found in different parts of the country. Enugu state, is not an exception among the states of the federation that have abundant of these mineral resources. Enugu state has the highest Coal deposit in Nigeria, hence its slogan Coal City State.

According to geologists, Coal is a fossil fuel formed from the decomposition of organic materials subjected to geological heat and pressure for millions of years. It is considered a non– renewable energy source because it cannot be replenished within human time frame. It is a combustible black or brownish – black sedimentary rock normally occurring in rock strata in layers or vein called coal beds or coal steams.

Coal was first discovered in 1909 by a colonial mine engineer – Albert Kitson at the Udi Ridge, in Enugu, south eastern Nigeria. Albert, contrary to his quest for silver discovered coal.

When the coal exploration was on the boom in the country, it was exported to other countries like Ghana, United Kingdom, Egypt and South Africa. Its contribution to the economic growth of the nation cannot be over emphasized. This is evident with the production at the mines in  Onyeama, Ogbete, Iva Valley and Okpara area of Enugu climbing from 25,511 tons in 1916 to an estimated 583, 422 tons.

But it was quite unfortunate that the federal government of Nigeria abandoned its exploration and mining upon the discovery of crude oil in 1956. The discovery of crude oil also made coal to loose two of its major customers which are Nigerian railways and Electricity corporation of Nigeria. This is because the duo formally uses coal to power their equipment but swiftly started using diesel and gas as a better alternative. Coal mining was also negatively affected by the 1967 Nigeria civil war. This and many others lead to the gradual decline in the Nigerian coal exploration.

The effect of the war to the Nigerian coal exploration

At the end of the war in 1973, most parts of the South Eastern Nigeria had been ravaged and many expatriate mining experts, mostly from Britain and Poland had left Nigeria. The exit of this experts coupled with the discovery of crude oil in commercial quantity, which made the federal government of Nigeria to abandon coal. This henceforth,  resulted in the neglect and subsequent abandonment of the massive infrastructure at the mines managed by the Nigerian Coal Corporation (NCC). The NCC tried to manage operations for another 30 years. Their effort to do this was unsuccessful and it finally folded in 2002. The former miners were not laid off, nor was their employment terminated. The only legacy of mining they  have is the Colliery Quarters near Iva Valley that they live.

Mining is no longer carried out at the Onyeama, Iva Valley, Ogbete and Okpara mines.

As a matter of fact the above mining places, have been vandalized  and looted, and hoodlums and animals make it dangerous to approach the area. The host communities lament the waste of materials and space left to rot rather than put to use for the benefit of the communities.

Importance of Coal In Nigeria

Coal, before its abandon in Nigeria has played the following vital roles.

On the other hand, it has some disadvantages that do affect human life especially to the immediate environment.

Washing off of some associated chemical particles before use makes our water bodies toxic and bring about soil degradation.

It is obvious that Nigeria is richly blessed by God with mineral and human resources. Each of this resources have a role to play in the economic growth and development of Nigeria, hence none of them is not worthy of harnessing to the fullest.

Coal mining is still an important aspect of the Nigeria’s revenue generation. It is important that the federal government of Nigeria revitalize the coal mines in Enugu regarding the role it has played in the economy of the country. This is not the era of oil boom, therefore depending on the oil as the only major and source of revenue is not encouraged.

Do you know that Swifttalk Limited provides Internet Enabling Services in Enugu State.

To know more about our services contact us today.