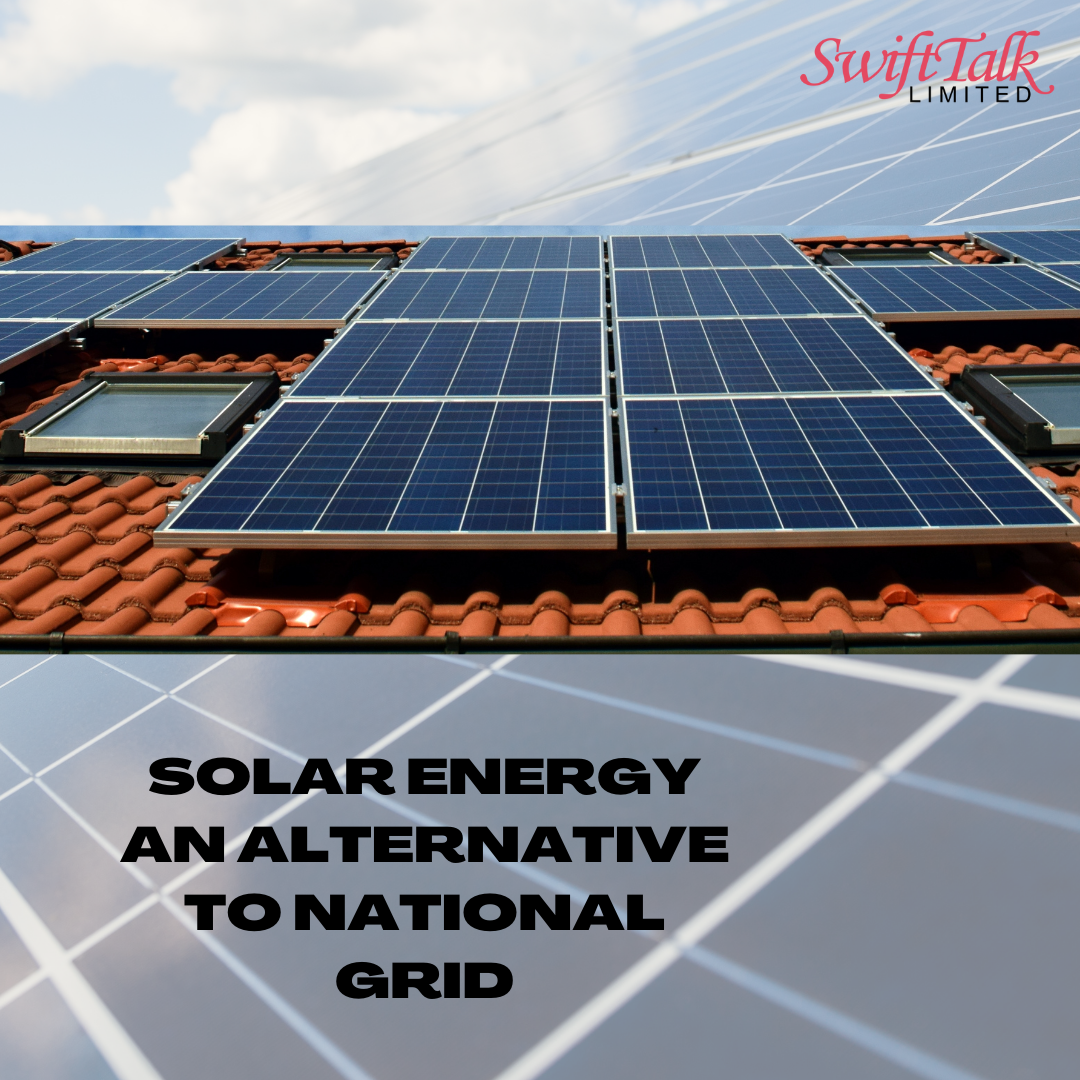 Solar energy is a form of energy that is being generated from the sunlight. It is one of the five major sources of renewable energy.

Solar energy is also described as radiation from the Sun which can produce heat, causing chemical reactions, or generating electricity. Solar energy, if well harnessed is capable of generating power that will solve our future electricity problem. In the 21st century solar energy is expected to become increasingly attractive as a renewable energy source because of its inexhaustible supply and its nonpolluting character, in stark contrast to the finite fossil fuels coal, petroleum, and natural gas.

Sun remain an extremely powerful source of energy, and sunlight is by far the largest source of energy received by earth. Because of the enormous radial spreading of radiation from the distant Sun, its intensity on the earth surface is not high as it is supposed to be.

The technology surrounding the conversion of sunlight into solar power is made possible by the use of Solar Panel, Inverter, Battery and Charge Control.

The Solar panel is a photovoltaic (PV) cell that absorbs energy from the sun upon its exposure to the sunshine and convert it to electricity. A PV cell is made of semiconductor material. In order to attract enough energy from the sun, it is preferably positioned in an elevated strategic position (mostly roof tops) and in a solar garden. When photons from the sunlight strike a PV cell, they may reflect off the cell, pass through the cell, or be absorbed by the semiconductor material. Only the absorbed photons provide energy to generate electricity. When the semiconductor material absorbs enough sunlight (solar energy), electrons are dislodged from the material’s atoms. Special treatment of the material surface during manufacturing makes the front surface of the cell more receptive to the free electrons, so that the electrons naturally migrate to the surface of the cell.

On the other hand the polycrystalline solar panels which is made from several silicon chips that made it difficult for sunlight penetration are less efficient. Polycrystalline are cheaper than the monocrystalline. However, the choice is on individual basis.

Inverter in solar system simply works to convert the solar energy which has been generated by the solar panel in the form of Direct Current (DC) to Alternating Current (AC) which is the form it will be used by electrical appliances.

The batteries used in a solar energy system function as energy accumulators and are responsible for storing the excess energy harvested by the solar panels. The batteries act as back up to the system by providing electrical energy when there are service interruptions or in the night when the solar panel may not be charging.

Solar charge controller is another important device in a solar system. It helps to prevent the battery from overcharging by regulating the voltage and current coming from the solar panel to the battery.

With the above electrical devices one can comfortably set a solar power system, depending on the required output.

The advantages of Solar power system cannot be overemphasized both in our homes and industries, because it has been one of the means to get and enjoy clean energy.

Solar energy as a renewable source of energy from sunlight is very cheap to get. It is ever ready and available provided sun keep shining.

Installing solar panels in your home for solar energy helps in combating greenhouse gas emissions and reduces our collective dependence on fossil fuel. Traditional electricity is sourced from fossil fuels such as coal and natural gas. This non-renewable source of energy when burnt releases toxic gases such as carbon mono-oxide (CO) that are very detrimental to human health especially respiratory related diseases.

Solar power helps us to save and overcome the unbearable electricity tariff in the country.

It offer long-term savings, because it’s basically free to capture the power from the sun.

The Solar panels significantly improve your resale value. Most home buyers understand what a home with solar panels means, because the system is already in place and they do not have to make the initial investment and installation.

Solar system is very easy to maintain. It does not require much technical know how for servicing and maintenance like our generators. Once it has been installed it can last for years without any effect of power epilepsy.

However, in a developing country like Nigeria where electricity has been a big problem. One need not to be told to embrace the modern system of enjoying steady power supply. Over the years Solar power system is gradually taking place of national grid, both in homes and industries.

At Swifttalk Limited , an Internet Service Provider (ISP) organization, we are not left. We enjoy solar power system for the optimum maintenance of our devices and for effective service delivery.

Choosing the right Connectivity for your IOT use Cases
March 9, 2022