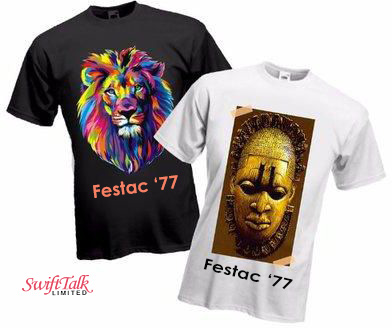 What is it about Festac 77 that remains in the Nigerian memory? quite young at the time, but one enduring memory I have of the event is the Festac77 anthem.

Let another world be born

Be written in the sky

Full of courage issue forth

Let the martial songs be written

An anthem that reminds many of one of the greatest black festival held. It is a song recited during the closing ceremony of FESTAC 77 (Festival of Art and Culture) , the wordings conveys a message of hope, hope for a new generation, a call for the Africans to realize what it means to be free and make proper use of the resources available at their disposal to develop their various countries. FESTAC 77 is known to be the Second World Black and African Festival of Arts and Culture held in 1977 (The first was in Dakar, Senegal, 1966). The festival took place in Lagos, Nigeria. Spanning from 15 January 1977 to 12 February 1977, this festival celebrated African arts, music, religions, drama, and so much more.

The event boasted of more than 17,000 participants representing all African nations and nations across Africa. Some remarkable artist who performed include Fela Kuti, Stevie Woner, Miriam Makeba, Bembeya Jazz Nation. In total about 50 plays, 150 music and dance shows, 80 films, 40 art exhibitions and 200 poetry and dance sessions were staged.  A housing estate known as Festac Village was constructed as accommodation for about 17,000 participants, surprising right. The housing estate was proposed for construction within two years, with more than 40 contractors working on different sites of the project. In total 5,088 dwelling units were built prior to the festival and an additional 5,687 were to be completed by the end of 1977. During the festival, the housing estate was the venue for performance rehearsals and interaction by participants as various troupes rehearsed their routines in the day and at night.

Uchenna Ikonne, renowed poet writing on May 13, 2017 for Red Bull Academy called it “the perfect opportunity for Nigeria to flaunt its newfound status as a prosperous petro-state, demonstrating its worthiness of the nickname ‘the Giant of Africa’.”

Also, according to Uchenna Ikonne, renowned poet and former Senegalese President Leopold Sedar Senghor was instrumental in using Nigeria as a beacon of unification.

He declared, “Nigeria is to Africa what Greece was and still is to the history of Europe.”The official emblem of the festival was a replica crafted by Erhabor Emokpae of the royal ivory mask of Benin. The hosting of the festival led to the establishment of the Nigerian National Council of Arts and Culture, Festac Village and the National Theatre, Iganmu, Lagos.] Most of the events where held in four main venues: the National Theatre, National Stadium, Surulere, Lagos City Hall and Tafawa Balewa Square.

It was a celebration to be remembered, it was also the celebration that made Fela Kuti known. Although this was one of the biggest festivals and brought so much joy to Nigeria, it was also the beginning of the Nigerian downfall as the level of money mismanagement surged through the roof. Uchenna reports a famous Gowon quote that “money is not Nigeria’s problem, but how to spend it”. Nigeria spent the money on infrastructures, facilities and centric constructions for FESTAC ’77 hit over $300million in ’70s dollar.

Nigeria’s wealth at the time meant funds can be embezzled without significant negative effects on the Nation’s economy. The system slowly became our fabric and our future got shortchanged by lack of vision.

A nation that fails to visualize into its own vision is doomed to fail and that’s the Nigerian story. It wasn’t just about positively investing our wealth either.

We failed to realize the concept of potential hard times. We allowed ourselves be deceived by momentary wealth and selfishly shared it in parts amongst ourselves.

Aims of the Festival

FESTAC 77 is closely tied to the history of the Blackman and his struggle for recognition and equality with the rest of the human race. The blacks sought for identity, their own values of civilization, they were anxious to rediscover their own personality. It forever is a festival to be remembered, it was a moment of pleasure that held a lifetime of bittersweet years ahead. It is a lesson and an inspiration to many. From your perspective you would see the faults in a mission they undertook. This little run through is enough to give the younger generation time to learn from our ancestors mistake and never repeat it again.

– Queen Idia, the face of FESTAC 77 was the mother of Esigie, the Oba of Benin who ruled from 1504 to 1550. She played a very significant role in the rise and reign of her son. She has been described as a great warrior,  who fought relentlessly before and during her son’s reign as the Oba (king) of the Edo people.

–  SwiftTalk Limited is an internet service provider. We provide core internet service with over 20 year’s track record of provisioning our clients with enterprise connectivity solutions. .